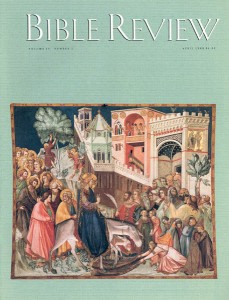 What it really means

016 017 On Palm Sunday, millions of Christians will again welcome Jesus’ entry into Jerusalem with the familiar words of Matthew 21:9:1 “Hosanna to the Son of David!a Blessed is he who comes in the name of the Lord! Hosanna in the highest!”... END_OF_DOCUMENT_TOKEN_TO_BE_REPLACED

Is It Possible to Understand the Book of Job?

026 026 The book of Job, one of the world’s greatest literary works, is better known for the problems it poses and the issues it spawns than for its answers and resolutions. While to the untutored eye, Job (at least in translation) reads smoothly from the... END_OF_DOCUMENT_TOKEN_TO_BE_REPLACED

A New Challenge to the Documentary Hypothesis

Have modern scholars failed to appreciate the overall structure in Genesis 1–11?

034 The documentary hypothesis states that the Pentateuch, the first five books of the Bible, is a compilation of several originally independent documents. Ancient editors or redactors collected these documents, which had been composed at various points in the history of the ancient community, and combined them in... END_OF_DOCUMENT_TOKEN_TO_BE_REPLACED