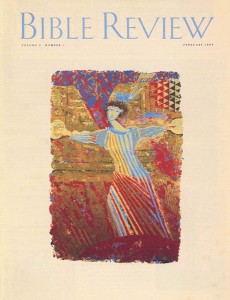 The scholarship of biblical poetry might be thought the most benign of worlds. In fact, it has recently been rocked by a dispute that resembles a courtroom drama.

The antagonists are both experts. Their dispute is personal, as well as scholarly. Both are the authors of recent books on biblical poetry.

James L. Kugel, Harry Starr Professor of Classical and Modern Jewish and Hebrew Literature at Harvard University, is the author of a book published in 1981 entitled The Idea of Biblical Poetry (Yale University Press).

Robert Alter is Professor of Hebrew and Comparative Literature at the University of California, Berkeley. In 1985, four years after the 1981 publication of Kugel’s book, Alter published The Art of Biblical Poetry (Basic Books).

Kugel reviewed Alter’s book in the January 1987 issue of the prestigious Journal of Religion. The review is a “catalog” (Kugel’s word) of instances in which, according to Kugel, Alter has copied and appropriated from Kugel’s previously published book.