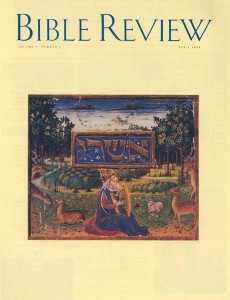 Thou shalt not make unto thee a graven image, nor any manner of likeness, of any thing that is in heaven above, or that is in the earth beneath. … Thou shalt not bow down unto them, nor serve them …” (Exodus 20:4, 5).

The Second Commandment’s prohibition against the worship of idols often became for Jews a prohibition against the making of figurative art. As The Hebrew Bible in Medieval Illuminated Manuscripisa makes abundantly clear, however, this interpretation of the proscription was not always followed. This handsomely produced book attempts to reveal the wealth not only of a few individual images, but also of extensively illustrated narrative cycles found in numerous manuscripts made for Jews during the Middle Ages and the early Renaissance. It achieves this admirable goal by unfolding, in the epic manner of the Bible itself, the major stories of the Hebrew Bible (what Christians refer to as the Old Testament) in chronological sequence. The author has written chapters on Adam and Eve, Noah, Abraham and Isaac, Jacob, Joseph, Moses and Aaron, David, and Solomon. Two final chapters pick up stragglers: “The Man of God” discusses Samson, Job, Jonah, and Daniel; and “The Woman of Worth” deals with Miriam, Ruth, Esther, and Judith.