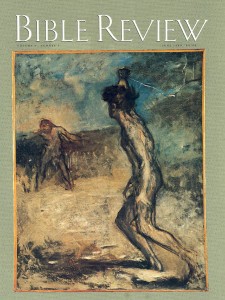 Karl Marx, when he was living in Highgate, London, was once asked to address a group of theologians. On his arrival, the meeting place was full of tobacco smoke, and Marx remarked, “Theologians always cloud the issues.” When I remind theologians of this, they invariably reply, “Yes, and you in biblical studies always simplify them.” If this be the case, the object we study, the Bible, is certainly not simple.

The first Bibles I ever saw were bound in black covers—Bible black as a poet called it. They stood out, unattractive and somehow odd and strange. They evoked the cromlechs—the large black stones, or megaliths—that dot so many hills in Great Britain. These black stones originally had a religious purpose. They conveyed the sense of awe and mystery and even terror that early Britons felt surrounded them.

For thousands of Jews and Christians, the Bible has been, and remains, a sacred, numinous, awesome book. Religious Jews believe that in the Bible the eternal has entered into time, the unseen has taken visible form, the unknown has become apparent, the intangible has become tangible in written documents that we can handle. The Law of God has become incarnate in print. For religious Jews, to read the scriptures, and even to quote from them, is to be put in touch with the divine order of being. That is why in Judaism the study of the Hebrew scriptures is worship. It is more important to study them than to obey them, it is said, because without study you will obey them in the wrong way.