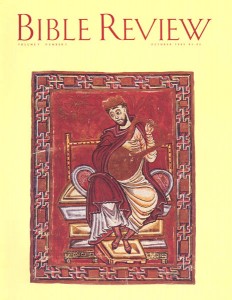 Some missing illuminations from the pages of an ornately illustrated Bible that once belonged to a medieval king have been returned to their original setting, thanks to the largesse of London industrialist and manuscript collector J. Paul Getty.

The history of this expressively illustrated Bible is for the most part shrouded in mystery. What is known of its peregrinations has been marked by tragedy and misfortune.

The first time we hear of it is in the 13th century, when it was in the possession of Manfred, king of Sicily. Whether it was created for Manfred or was somehow acquired by him, we do not know. Nor do we know the identity of the eminently talented, presumably southern Italian artist whose creation it was, nor even precisely when he worked.

In any event, Manfred was slain by Charles of Anjou in 1266 in a bid for the Sicilian throne. Manfred’s followers then turned to Conradin of Hohenstaufen, Manfred’s nephew and heir to the Holy Roman Empire, to lead them. Manfred’s Bible was presented to Conradin at his Bavarian court as an inducement to assert his uncle’s claim to the Sicilian throne. Conradin was then 14 years of age. Two years later, in 1268, Conradin fearlessly crossed the Alps and entered Rome in an attempt to unify the Holy Roman Empire. But shortly after he reached Rome, French forces detained him, tried and convicted him as an imposter to the throne and later, in Naples, beheaded him.

Although Conradin possessed the Bible for only two years, it is his name that was attached to it. It is known as the Conradin Bible.