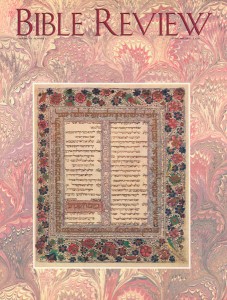 I would like to explore a single episode—or pericope—involving the prophet Elisha, not so much to understand it better (although I certainly want to), but, more importantly, as a basis for discussing what I believe is an important new trend in biblical studies—the shift from the text to the interpreter.

Increasingly, scholars are changing the focus of their inquiry. They are turning away from probing the history behind a biblical text, or even the history of the text. The expanding frontier finds more and more biblical scholars investigating the readers who have interpreted the texts.

Finding out what happened at the Exodus from Egypt, for example, or deriving definitive religious teaching from the biblical account seem less important than asking about how and why we have read the Bible as we have. There is new urgency in finding out the social, religious and moral consequences of how the Bible has been read through the centuries.

Exploring this new and in some ways disturbing phenomenon in a thoroughly traditional way—by interpreting a specific text—will be the burden of this article.