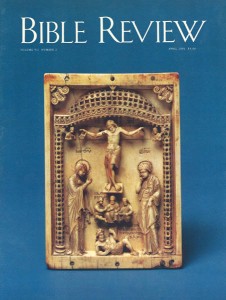 Adjacent to the 11 caves on the northwestern shore of the Dead Sea where the famous Dead Sea Scrolls were found are the remains of an ancient settlement overlooking the Wadi Qumran. It is almost certain that the people who lived in this settlement placed the scrolls in the nearby caves. In two of the caves—Cave 4 and Cave 11—archaeologists found regularly spaced holes in the walls where supports for shelves were once anchored. Before the shelves collapsed or were destroyed, banks of scrolls were no doubt neatly stacked on the shelves.

But who were the people who lived in this settlement and collected these scrolls?

Throughout the history of research on the Dead Sea Scrolls, the dominant position has been that the people who inhabited this settlement were part of a Jewish sect known as the Essenes. True, some scholars questioned this view and preferred to identify the group as Pharisaic, Sadducean or even Christian, but their views had only very modest support.

In the last year, however, a distinguished scholar from New York University, Lawrence H. Schiffman, has argued that certain important, more recently available Qumran (that is, Dead Sea scroll) texts exhibit traits of the Sadducees. If so, we must raise anew the question of who the people were that lived at Qumran.

Schiffman relies primarily on a still un-published document known as 4QMMT,a or MMT for short, and, to a lesser extent, on the famous Temple Scroll.