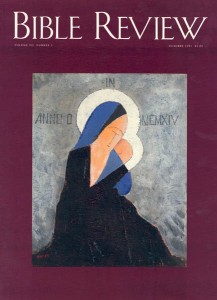 Adam and Eve discussing women’s liberation, Methuselah happily listening to Golden Oldies, metal detectors for animals entering Noah’s ark, Moses with the tablets of the law being questioned by civil libertarians, King David increasingly exaggerating Goliath’s proportions with each re-telling of the story. The names are familiar, but their activities are not. At least not to those who know them only from the Bible. But for the millions who daily read the comic pages, biblical personages are among the many characters that populate what has been called “the preeminent form of popular humor in America in the twentieth century.”1

Eight years ago, I began collecting comic strips that deal with the Bible. Actually, I have a number of “collections”; others cover ancient history, ministers, ethics and Judaism. But by far the largest is my biblical collection, containing over 300 individual cartoons. Approximately two-thirds relate to the Hebrew Bible.

The basic tools of my trade are few: a newspaper and a pair of scissors. The methodology is simple: cut, organize and, sometimes, make slides. The uses of the collection are varied: the topic of papers at professional meetings, an audiovisual complement to public talks, a welcome change of pace in classroom lectures and (not to be overlooked) a graphic means of documenting certain tax deductions for the IRS.