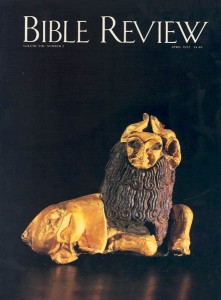 Writing in Babylonia began as pictures. A cow’s head stood for “cow”; a leg and foot, for “to stand” or “to go”; a human head with a bowl beside it meant “to eat.” Gradually the pictures became stylized until they were unrecognizable unless seen in that developmental context. (Illustrations of these examples appear below. The forms in the left column are found in the earliest tables from Babylonia [before 3000 B.C.]; the forms in the right column were current at Ebla about 2300 B.C.)

To denote shades of meaning and to write abstract ideas, some signs came to be use for the sounds of the words they represented, rather than the meaning, although they continued to be used for meaning as well. For example, “thinking” might be difficult to show in picture writing, but a picture of a thin man beside a king could give the sound, in English of course, “thin-king.” Ancient scribes developed ways to mark the kind of meaning intended with non-phonetic signs called determinatives. Context would also help to indicate how the signs should be read; by context, the reader would know whether to read “thinking” or “the thin man is king” or “the king is a thin man.”