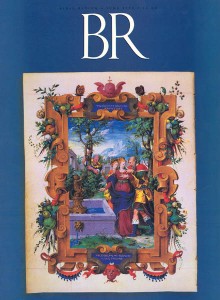 True or not, Anita Hill told the story of her alleged sexual harassment by the now-Supreme Court Justice Clarence Thomas to a nationwide television audience of millions, fascinated by the drama of sex and power. But Susanna was never given the opportunity to tell how she had been sexually harassed by two scurrilous old men. Condemned to silence and then to death, Susanna would have been executed but for the intervention of a young advocate who conducted the most famous cross-examination in history. Yet her story has been recounted for centuries—why? It too is a drama of sex and power, with the added impact of God and the threat of death. Short—only 64 verses—the fate of Susanna, as a woman and a text, is worth examining.

If you ask a Roman Catholic whether the story of Susanna is in the Bible, the answer, quite correctly, will be: “Yes, it’s the 13th chapter of the Book of Daniel.” If you put the same question to a Jew or a Protestant, the answer, quite correctly, will be: “No, it’s not canonical. It’s in the Apocrypha, a group of texts that didn’t quite make the final cut.”

That will surprise many people who don’t realize that even Catholic and Protestant Bibles are not the same.