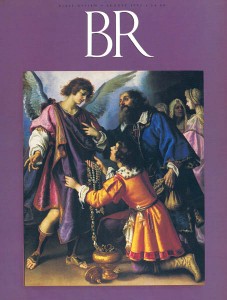 Most Dead Sea scrolls are scrolls—that is, at one time or another they were rolled up. The Copper Scroll, which we had been asked to photograph in collaboration with James Charlesworth of the Princeton Theological Seminary and the Department of Antiquities of Jordan, presented an especially difficult challenge. Because the inscribed metal of the Copper Scroll was too brittle to flatten, it was cut into 23 sections that look a lot like fragments of a cylinder. The problem: How to come up with a clear flat image of something that is anything but flat?

It took us a full day of experimentation to come up with a solution. We decided to use a low-angle “raking” light that would create glare and shadow and thereby make the letters “jump out” in relief. We first photographed each portion of the scroll with a narrow-beam electronic flash at the top of the scroll; then we turned the scroll within its makeshift felt cradle so the bottom portion was closest to the flash. To insure that we were always photographing a relative flat surface, we rotated each scroll section and shot first the right, the middle and then the left side. Pictures were taken in both color and black-and-white, with each piece of the Copper Scroll typically shot from six different perspectives in some 15 exposures. We worked two weeks at this tedious job. But it was important to do things thoroughly because each perspective added clarity to the readings.