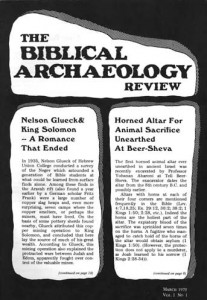 The site of Hazor, located in upper Galilee, consists of a 30-acre upper tell, plus an adjacent plateau at a lower level of over 175 acres. The tell, unlike the plateau, was occupied almost continuously from the 27th century B.C. to the 2nd century B.C. By contrast, the plateau, or lower city, was a part of Hazor only during the Middle and Late Bronze Ages, from about the time of Abraham to the Israelite conquest. This was the Canaanite period, when Hazor was at its zenith, when, as the Bible tells us, Hazor was “the head of all those kingdoms” (Josh. 11:10), a characterization confirmed by archaeological excavations. In Canaanite times, Hazor was the largest city in the area. Excavations also confirm that this great city was destroyed and burned by Joshua (Josh. 11:11–12).

Life continued thereafter at Hazor only on the upper tell, where it had also been confined before the Middle Bronze Age expansion. Following Joshua’s destruction, only a small unfortified settlement was maintained on the tell by the conquering Israelites. So it remained until Solomon rebuilt the city and re-fortified it with a casemate walla connected to a magnificent gate of three chambers on either side and two towers flanking the entrance. This major city of the Israelite monarchy was but one of 21 levels the archaeologists uncovered on the tell.