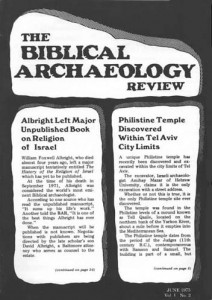 One of the things that must be done in starting a magazine is to decide how to spell. This is especially difficult with a magazine about archeologyoops, archaeology.

Archaeology is spelled with the ae diphthong in almost all Near Eastern scholarly publications. On the other hand, popular magazines and newspapers dont use it. And neither do scholarly anthropologists. It is not used in the French or Italian spelling of archaeology. And the official United States government spelling dispenses with the ae in favor of a simple e. (When Dr. Gus Van Beek of The Smithsonian Institution publishes the final report on his Tell Jemmeh excavations, the word will be spelled archeology.)

We thought we sensed a trend. We took Alexander Popes couplets seriously:

In words, as fashions, the same rule will hold.

Alike fantastic if too new or old:

Be not the first by whom the new is tried.

Nor yet the last to lay the old aside.

We thought archaeology was traveling the same road as encyclopaedia.

As some of our readers have noticed, our promotional materials spelled it archeology. But after long discussions among the Editorial Advisory Board, we decided to retain the classical ae. In Near Eastern archaeology, the time is not yet. And in spelling, we are content to follow, not lead.

Tell or Tel presented another difficult problem, to which there is no completely satisfactory answer.