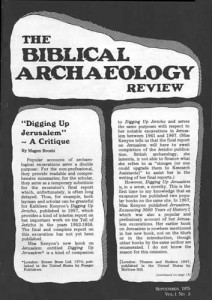 Popular accounts of archaeological excavations serve a double purpose: For the non-professional, they provide readable and comprehensive summaries; for the scholar, they serve as a temporary substitute for the excavator’s final report which, unfortunately, is often long delayed. Thus, for example, both layman and scholar can be grateful for Kathleen Kenyon’s Digging Up Jericho, published in 1957, which provides a kind of interim report on her important work on the Tell of Jericho in the years 1952–1958. The final and complete report on this excavation has not yet been published.

Miss Kenyon’s new book on Jerusalem entitled Digging Up Jerusalema is a kind of companion to Digging Up Jericho and serves the same purposes with respect to her notable excavations in Jerusalem between 1961 and 1967. (Miss Kenyon tells us that the final report on Jerusalem will have to await completion of the Jericho publication. British archaeology, she laments, is not able to finance what she refers to as “stooges (or one could upgrade them to Research Assistants)” to assist her in the writing of her final reports.)

However, Digging Up Jerusalem is, in a sense, a novelty. This is the first time to my knowledge that an excavator has published two popular books on the same site. In 1967, Miss Kenyon published Jerusalem, Excavating 3000 Years of Historyb which was also a popular and preliminary account of her Jerusalem excavations. Her earlier book on Jerusalem is nowhere mentioned in her new book, not on the blurb or in the introduction, though other books by the same author are enumerated. I do not know the reason for this omission.