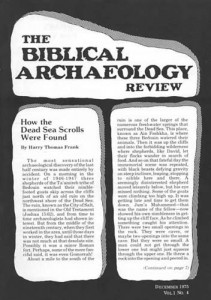 The climate of the Near East has not changed since Biblical times, according to most scientists, a view shared by climatologists, as well as by geologists and dendrochronologists (experts in dating tree rings).

Thus most plants in Bible lands today are descendants of plants which flourished there in Bible times. These living plants may be seen as archaeological artifacts. Instead of having been buried in the earth for millennia, they have reproduced themselves generation upon generation. Like the unearthed pottery vessel, the living plant is a datum which may help explain particular Biblical passages or provide general background to the events recorded in the Bible.

Sometimes the Biblical name, as well as the plant, survives. During Elijah’s flight from the wicked Jezebel, who sought to kill him, the prophet lay down under a tree, tired and discouraged, there an angel of the Lord appeared to him (1 Kings 19:4). The name of the tree under which he rested is called Rotem in the Bible. The Bedouin today call it Ratam. This name has even passed into its scientific designation, Retama raetam. It is known popularly in English as the broom-tree. However, in older Bible translations it is sometimes erroneously translated as a juniper tree, a mistake which would not have been made by anyone who knew what the Bedouin call Ratam. The Rotem is a lovely bush with long willowy branches and small, white, scenty flowers that grow right on the branch.