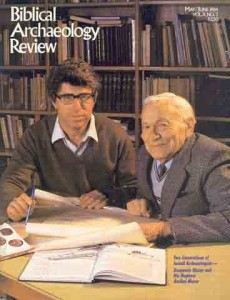 Amihai Mazar: In my case, it was quite natural. I have been looking at excavations since I was 6 or 7. It was in the family. My father always took me to excavations. I visited the excavations of my uncle, Benjamin Mazar. I remember at the age of 15 participating for the first time in an excavation. It was at Beth She’arim with Professor [Nahman] Avigad. At that same age I worked in the Haifa Museum.

HS: You mentioned that your uncle is Benjamin Mazar, and of course he is the dean of archaeologists in Israel today and has led the excavations at the Temple Mount in Jerusalem since 1967. Did he have much influence on you?

AM: Yes, of course. We were quite close and I followed his work throughout the years. But he didn’t influence me directly to become an archaeologist, although I think through him I came to archaeology. Otherwise, perhaps I wouldn’t have thought about it. But naturally both he and my father, who is very much interested in archaeology himself and in the history of this country, led me into the field.