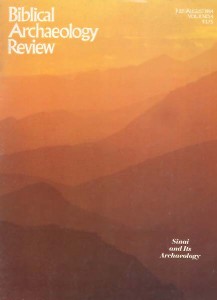 In the March/April BAR, David Ussishkin reported on the Assyrian siege ramp and the Judean counter ramp that he excavated at Lachish (see “Defensive Judean Counter-Ramp Found at Lachish in 1983 Season,” BAR 10:02). His report, together with the review of his book on the Assyrian siege of Lachish, extensively illustrated with reliefs from Sennacherib’s palace and photos of excavated finds, provides an unusual account of siege warfare in ancient times.

The elements of this warfare were all displayed with dramatic intensity: the arrows and the helmets, and the scale armor to counter the arrows’ thrusts, the battering ram and the firebrands thrown from the walls by the defenders to burn the ram, and, to counter this, the water the attackers poured on the ram, and the Assyrian siege ramp countered by a Judean ramp. There was one find, however, that Ussishkin could not explain—four links of a metal chain uncovered amid the destruction debris in front of the city wall where the Assyrian attack had been most intense.

This is how Ussishkin described the discovery:

“A rather unusual find was an iron chain about 37 cm long, composed of four long, narrow links, each about 10 cm long. The chain was found lying in the burned debris in front of the revetment wall. This chain must have served some function in the battle, but we do not know what it was.”

What was this mysterious chain used for in the heat of battle? I believe I have found the answer.

The key to the answer lies in what I called in my book, The Art of Warfare in Biblical Lands (1963), a “chain reaction.” This appears to be a particularly apt concept to explain the function of this mysterious chain.

The chain reaction I refer to in my book is the continuous interaction of offensive weapons and defensive devices, each trying to top the other in a never-ending chain reaction. We have seen several examples of this in Ussishkin’s BAR article and in the review of his book on Lachish, as I mentioned above. The chain, I believe, is another example.

The chain was part of a defensive device to counter the most horrifying weapon known in ancient siege warfare—the battering ram. The body of the battering ram was made of prefabricated wood and leather segments transported from Assyria and then assembled at Lachish. The formidable siege machine was rolled up a ramp into place close to a vulnerable spot in the city wall. Within the ram, a heavy shaft was suspended on ropes from the ceiling of the turret. Two soldiers pushed the shaft backward and forward like a pendulum, each swing thrusting the shaft against the city wall until it broke through. As the shaft of the battering ram swung close to a wall, the defenders would lower a long chain outside the wall. The ends of the chain would be held by defending soldiers, each standing at some distance from the other on the 066wall. The middle of the chain would be lowered below the point of the thrust of the shaft. When the ram reached the wall, despite defensive efforts to prevent this, the desperate defenders on the wall would lift the chain, catching the shaft and raising it, thereby deflecting its direct attack on the wall.

I believe the chain found at Lachish is dramatic evidence of such a desperate counter-reaction to the attack of the Assyrian battering rams.

Unfortunately, the defensive chain also produced a reaction. The attackers would pull the chain down, away from the shaft, with grappling hooks. This is probably what happened at Lachish, making the chain or some of its links fall to the base of what Ussishkin refers to as the revetment wall.a

The use of a chain to counter the battering ram and the use of grappling hooks to counter the chain is pictured in astonishing detail in a relief of the Assyrian king Ashurnasirpal II (883–859 B.C.) uncovered at his palace at Nineveh by Austin Henry Layard in the 19th century. The relief is now in the British Museum and was carved only about 150 years before the Assyrian siege of Lachish.

In my book on ancient warfare, I described this relief as follows:

“This is the most detailed and comprehensive siege scene in the Assyrian reliefs until the period of Sennacherib. The relief shows five methods of assault being carried out simultaneously. From right to left: (1) Archers, protected by shields and coats of mail, firing volleys of arrows; (2) Battering ram and mobile tower in action; (3) Tunneling operators—shown in X-ray style on the extreme left and extreme right of the city; (4) The low wall being demolished by armored sappers, using pikes and spears; (5) Storming parties mounting scaling ladders. A permanent feature of the art of warfare is the continuous interaction of offensive weapons and defensive devices, each trying to top the other in a never-ending chain reaction. The entire scene is, of course, an expression of it. But within the overall picture there are subsidiary actions which highlight the principle. At the right, in the battering ram detail, the defenders seek to deflect the battering pole with the aid of chains. To counter this, two Assyrian soldiers are seen trying to pull the chains away from the pole by gripping them with hooks and using the weight of their bodies for power.”

Here is a rare case of ancient reliefs and archaeological discoveries complementing each other, thus explaining the chain found at Lachish.

We wish to thank Professor Ussishkin for permission to publish the chain links from Lachish. In his letter sending us the pictures, he asked us to state that he “made a similar suggestion independently in a lecture in [the] Institute of Archaeology in Tel Aviv on 14th November 1973, but did not put it in writing because none of Sennacherib’s reliefs—portraying the conquest of Lachish as well as other cities—shows the use of chains in fighting siege machines. Thus this interpretation for the use of the chain remains unsubstantiated, and [he] preferred not to use it in writing.”—Ed.

Yigael Yadin (d. 1984) had an extraordinary career as a scholar, statesman and general. Formerly chief of staff of the Israel Defense Forces and Deputy Prime Minister of Israel, he was also the author of many popular books on archaeology, including The Art of Warfare in Biblical Lands (McGraw-Hill, 1963) and volumes on his landmark excavations, Hazor and Masada.