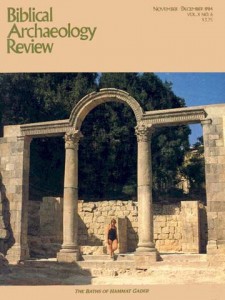 Hot springs drew the afflicted from around the world

022 According to the Greek biographer Eunapius, the second most beautiful bath complex in the entire Roman Empire during the fourth century A.D. was located in, of all places, Palestine—at a site known as Hammat Gader.1 Hammat Gader lies just five miles southeast of the Sea of Galilee... END_OF_DOCUMENT_TOKEN_TO_BE_REPLACED

Who or What Was Yahweh’s Asherah?

042 New inscriptions from two different sites have reopened the debate about the meaning of asherah, a term often used in the Bible. Is it—or she—a goddess? Is it a holy place? Or perhaps a sacred tree? Or a pole? Or possibly a grove of trees? All these... END_OF_DOCUMENT_TOKEN_TO_BE_REPLACED

Is the Cultic Installation at Dan Really an Olive Press?

A discussion that started in BAR escalates in the scholarly world

052 In an article in the September/October 1981 issue of BAR (“The Remarkable Discoveries at Tel Dan,” BAR 07:05), John Laughlin identified an unusual installation at Tel Dan, in northern Israel, as an Israelite cult installation associated with a water libation ceremony. In explaining the installation as having... END_OF_DOCUMENT_TOKEN_TO_BE_REPLACED

What a Concordance Can Do for You

The Bible word by word

060 Did you ever find yourself wondering (perhaps during a late-night movie rerun on TV) where Ben Hur is mentioned in the Bible, or where King Tiglath-pileser of Assyria appears? Maybe you want to know how closely Martin Luther’s famous assertion that humans are acceptable in God’s sight... END_OF_DOCUMENT_TOKEN_TO_BE_REPLACED

The Verdict on Advertisements for Near Eastern Antiquities—Dubitante

068 Supreme Court Justices are paid to decide difficult cases. In 1951, however, Justice Felix Frankfurter heard a case he couldn’t decide.a His brethren voted to affirm the decision of the court below. But Justice Frankfurter couldn’t make up his mind. So he took the unusual—perhaps unique—step of... END_OF_DOCUMENT_TOKEN_TO_BE_REPLACED