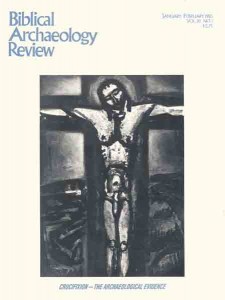 In the fill of the Mt. Ebal altar, along with bones and pottery sherds, we found an Egyptian-style scarab. Within an oval frame, the scarab displays a geometrical pattern consisting of a four-petal rosette and, between the petals, four branches. From each branch comes a uraeus (an Egyptian cobra).

This scarab is very rare; only five known parallels exist—one from Egypt, three from Israel and one from Cyprus. All these parallels date this special find to the period between the reigns of Ramses II (19th dynasty; 13th century B.C.) and Ramses III (20th dynasty; beginning of 12th century B.C.).

This scarab fixes the earliest date for the construction of the Mt. Ebal altar; it could not have been built before the 13th century B.C. Moreover, because this scarab comes from a stratigraphically sealed locus, together with a well-dated pottery sequence, it has even greater chronological significance—it gives us an approximate date for the original erection of the altar and cultic center.

Other distinctive pottery forms buttress the argument for a 13th–12th century B.C. date for the Ebal altar. Collar-rim jars were commonly used storage vessels during the settlement period and are dated by archaeologists to the 13th through the 11th centuries B.C.