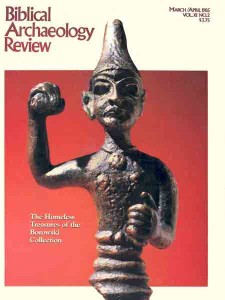 Elie Borowski survived his personal losses and the collective tragedy of Jews in World War II with a belief that humankind can “best achieve ethical and spiritual fulfillment by becoming conscious of its historical origins.”

Borowski’s contribution to making this happen is his lovingly accumulated Lands of the Bible Collection of 1,700 artifacts ranging over 4,000 years of ancient history.

“The Lands of the Bible Collection is a trampoline,” Borowski explains, “that lifts people into a realm of new ideas, new questions and new understandings about the Bible.”

Borowski’s hope is that when people see the ladders-to-heaven seal, the bronze 12th-century B.C. openwork stand, the horned Mesopotamian helmet and the inlay of a god fighting a seven-headed monster, they will be transported to a time before the Bible. Suddenly, through imagination, they will enter the world out of which monotheism emerged—and the Bible will become more understandable.

The provenance of most of the pieces in the Lands of the Bible Collection is unknown. No one will ever be able to pinpoint exactly where the artifacts were found or with what other artifacts and architecture they were associated. They cannot be dated by stratigraphy and context. These pieces came onto the antiquities market either from collectors wishing to sell or from people in the Middle East trained, not to be archaeologists, but to have a keen eye for a marketable commodity.