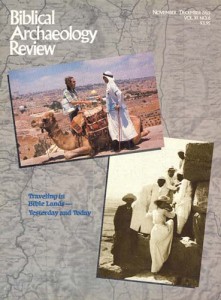 Underwater archaeology, no longer in its infancy, is rapidly becoming a youth. A current exhibition by the Israel Museum at Jerusalem’s Rockefeller Museum of recent finds recovered from Israel’s coast illustrates this growth.

As Israel was an ancient land bridge between Asia and Africa, so it was a sea bridge among Mediterranean ports. Vast numbers of ancient ships sailed the coastal sea lanes linking Greece, Anatolia, Syria and Egypt. The coastal sea lanes were dangerous, but they were less so than the open sea. In any circumstances, however, voyages were hazardous, and many of the ships went to their marine graves off Israel’s coast, which has few snug harbors or even bays or indentations that might offer some protection from a sudden storm. The ancient mariners thus involuntarily bequeathed to future generations their treasure troves, now slowly being recovered. Small-scale recovery of artifacts from the sea by fishermen, swimmers and amateur divers has been going on for a long time but now their efforts are being dwarfed by professional archaeologists using sophisticated modern equipment.

The science of underwater archaeology was stimulated by diving equipment developed during World War II for military purposes to enable divers to go deeper and remain submerged for longer periods. Jacques Cousteau, the father of modern diving, developed instruments for locating and recording objects, as well as methods of underwater photography.