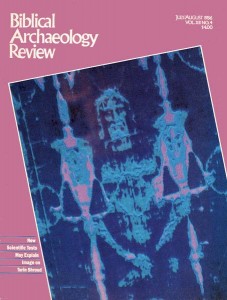 Hershel Shanks: Avi, I’m especially appreciative of this interview because over the years we’ve disagreed about many things, but we’ve remained friends, and we’ve always been able to talk about our differences. And that’s a very gratifying thing. You haven’t liked everything that’s appeared in BAR. But you once told me that it’s the only archaeological magazine that you read from cover to cover. Is that still true?

HS: Before we discuss the things we might disagree about, let’s talk about something that’s even more exciting: the fortress at Vered Jericho, south of the city of Jericho, which you recently excavated. As far as I know, nothing has appeared about it in English yet. Isn’t that true?

HS: And only the tiniest bit even in Hebrew.