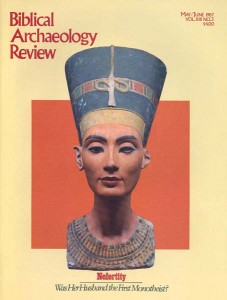 “No actual remains of Solomonic Jerusalem have survived,” Dr. Kathleen Kenyon wrote shortly before her death in 1978.1 Most scholars would agree with famous British archaeologist even today.

I believe she is wrong. A major Solomonic monument is visible in Jerusalem today for all to see. Indeed, virtually every visitor to Jerusalem does see it, but, like the scholars, fails to recognize it for what it is.

I believe part of the eastern wall of the Temple Mount is Solomonic construction.

All agree that in about 960 B.C. Solomon started to build his famous temple somewhere on the Temple Mount (see 1 Kings 5–7; 2 Chronicles 2–4), although there is considerable debate about just where it was located within this monumental enclosure.2 Nor is there any doubt that Solomon built a temple enclosure wall and filled it in to create a level surface or podium on which to build not only the Temple of Yahweh, but also his own palace.

In 587 B.C., the Babylonians led by Nebuchadnezzar destroyed Jerusalem and burned the Solomonic Temple.