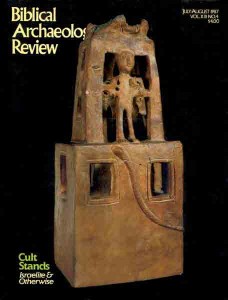 Hershel Shanks: The name of Avraham Biran is—and will be for generations—inextricably bound up with the name of Tel Dan. When anybody thinks of one, he’s inevitably going to think of the other. How long have you been excavating at Tel Dan, Dr. Biran?

Avraham Biran: It’s very flattering of you to say, “For generations.” But there’s nothing really permanent, as you know. I suppose to be remembered for a generation or two, that’s all one can really hope for. It is true, however, that Dan is probably the longest ongoing excavation in the country. We began at Dan in 1966. We have now completed our 19th season. We will have another brief season, which will bring us to 20. By that time, I think we’ll have done enough; we’ll have to sit down and put all the material together and publish the results.

HS: The word I get from the underground in Jerusalem is that you have had a very successful season this year.

AB: That’s right, that’s true. But I always wonder when we speak of a successful season, in what way is this season more successful than others? But if you refer to the discovery of unusual objects, then it’s true.

HS: What did you find?