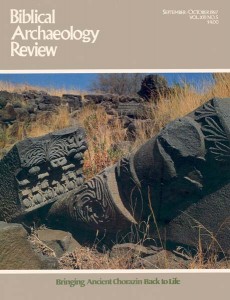 Seldom does archaeology come face to face with people actually mentioned in the Bible. When that happens, the discovery takes on a unique immediacy, touched with awe.

When a hoard of inscribed Hebrew bullae surfaced on the antiques market and was found to contain a bulla impressed with the name of Baruch, son of Neriah, known from the Bible as secretary and faithful companion to the prophet Jeremiah, the scholarly community was stunned.

That was more than ten years ago. Even now, however, the mysteries surrounding this hoard are as great as the revelations. So much is unknown about these little pieces of clay—so much that we intuitively feel should be knowable.

The first four bullae in this particular hoard—a hoard 059that would ultimately number over 250—came to light in October 1975 in the shop of an Arab antiquities dealer in East Jerusalem. The four bullae were purchased by a collector who took them for evaluation to the leading Israeli expert on ancient seals and scalings, Nahman Avigad of the Hebrew University.