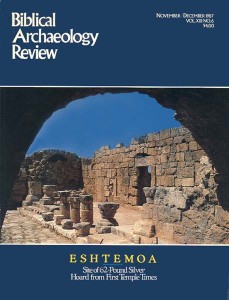 The Temple Scroll is the longest and, in my view, clearly the most important of the preserved Dead Sea Scrolls. It was composed, I believe, as an addition or, still better, a supplement to the Pentateuch, as a sixth book of the Torah, on the same level of authority as Genesis, Exodus, Leviticus, Numbers and Deuteronomy.

The 27-foot-long Temple Scroll has been brilliantly published with minute commentary in a handsome three-volume set by the late Professor Yigael Yadin of Hebrew University.1 His edition of the Temple Scroll is the finest publication of any Dead Sea Scroll that has yet appeared, a masterpiece that will be the basis for all further work on this scroll.a

Yadin almost assumed, however, without seriously discussing the matter, that the Temple Scroll was a sectarian composition belonging to the Jewish group that inhabited the settlement at Qumran near the cave where the scroll was found by Bedouin tribesmen. This group, by extensive scholarly consensus, formed part of the Essenes.