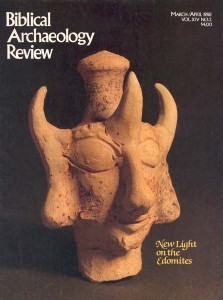 The Qitmit site contains two areas with structures (see plan). The southern area (Complex A) has been excavated; the northern area (Complex B) is still being excavated. To the west, outside these two areas, are two oval enclosures (one is omitted on the plan). Complex A consists of a three-room, rectangular structure; a circular enclosure with a basin, small pit and altars; and a bamah bounded on three sides by stone walls. The three-room structure (in foreground of photo) measures 34 by 18 feet and has two steps (lower center in photo) leading up to the center room. A layer of ashes a foot deep covered the crushed chalk floor in each of the three, 6 ½-by-13-foot rooms. During a second phase of construction, some of the structure’s walls were doubled in thickness (green areas on plan), and 3-foot-high podiums (blue areas), topped by broad, flat stone slabs, were added to each room. These podiums may have supported statues or cult vessels used in some ceremony.

The bamah, a low platform of fieldstones, measures 3 by 4 feet. It is preserved to a height of 16 inches. Large chunks of dislodged plaster were found scattered about the bounded area of the bamah. This plaster had been used to fill in the fissures in the bedrock of the enclosure in order to create a smooth surface on which various cult objects could be placed.