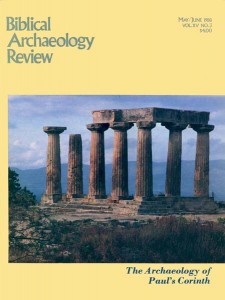 In 70 A.D. the Romans destroyed Jerusalem and burnt the Temple. The conflagration would be etched in the collective memory of the Jewish people forever.

The city lay mostly in ruins until, in about 130 A.D., the emperor Hadrian decided to rebuild it as a Roman city named Aelia Capitolina. According to some scholars, this helped trigger the Second Jewish Revolt against Rome in 132 A.D., a revolt also known as the Bar-Kokhba revolt after its military leader.

The second revolt ended like the first; the mighty Roman military machine eventually crushed the rebels despite their courageous and often desperate attacks.

After the Second Jewish Revolt, Jews were banned from Jerusalem, and Hadrian proceeded to create pagan city where Jewish Jerusalem once stood.

In the northern part of the city, Hadrian built a magnificent arched entryway into Aelia Capitolina, flanked on either side by a large tower. Inside the entryway was a large open plaza, and in the center of the plaza was a tall, decorative column. On top of the column probably stood a larger-than-life statue of the Emperor Hadrian himself.