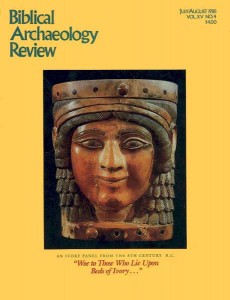 In an article entitled “Has Mt. Sinai Been Found?” BAR 11:04, Italian archaeologist and author of the popular, though now out-dated Palestine Before the Hebrews (New York: Knopf, 1963), Emmanuel Anati argues that he has found Mt. Sinai, the Mountain of God, on a ridge in the western edge of the Negev Highlands, four miles from the Egyptian border. He has now expanded his argument in an oversize, colorful and expensive book called The Mountain of God (New York: Rizzoli, 1986).

Anati’s search for Mt. Sinai, as presented in The Mountain of the God, is an anachronistic vestige from the 19th century. The only difference is that Anati’s book is illustrated with beautiful color pictures. The academic community—archaeologists and Biblical scholars alike—will, you may be sure, ignore this new revelation. The problem, however, is that many lay people with a genuine interest in the Bible and Biblical archaeology will be vulnerable to this kind of material, especially because the author is relatively well known, his subject matter is magnetic and his presentation is beautiful.

To review a work like this is, in a way, a disgraceful task. But it is important to do—both to save the trampled honor of archaeology as a serious scientific discipline and to protect the innocent mind of the lay public from these kinds of theories.