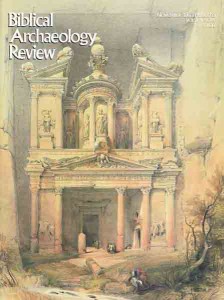 Five years ago, BAR published an extraordinary artifact—an ivory pomegranate less than 2 inches high (1.68 inches, to be exact) that was probably used in the Temple of Solomon, the only artifact from Solomon’s Temple ever discovered (“Probable Head of Priestly Scepter From Solomon’s Temple Surfaces in Jerusalem,” BAR 10:01, by André Lemaire).

The clue suggesting that the pomegranate was the head of a scepter or standard is a small hole in its base into which a thin rod could have been inserted. A similar scepter is pictured in the hands of the Assyrian monarch Sennacherib in reliefs carved on the walls of his palace in Assyria. Sennacherib besieged Jerusalem in the late eighth century B.C. Similar scepters with pomegranate heads have also been found from the Late Bronze Age. Other possibilities, however, are that the pomegranate served as an ornament in the Temple, as a decoration on an altar or as a finial on a throne or cultic box.