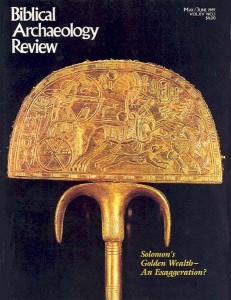 A new timetable for the publication of still-secret Dead Sea Scroll fragments is being negotiated between Israel’s Department of Antiquities and the scholar-editors to whom publication was assigned 35 years ago.

Fragments of approximately 400 different documents found in caves near the northwest shore of the Dead Sea remain unpublished and inaccessible to all but a select few scholars—the “charmed circle” Columbia’s Theodore Gaster has called them—to whom the manuscripts were given for publication more than three decades ago.

The date currently being discussed for completion of the scholars’ work is 1996. But Harvard Professor John Strugnell, newly appointed chief editor of the scrolls project, warns that it will probably be another two or three years after submission of a manuscript until Oxford University Press actually brings out each book containing the scholars’ work. It is anticipated that their publication will consume between 16 and 20 volumes.

Over 1200 “plates” of fragments rest in the vault of the Rockefeller Museum in Jerusalem, less than half of which have ever been published, although they have been assigned for publication to individual scholars. Up to now, 14 volumes have appeared in the publication process, compared to between 16 and 20 left to go.

According to most observers, considerable progress has been made in the past five years in moving the scrolls toward release and publication. This progress results from several factors.