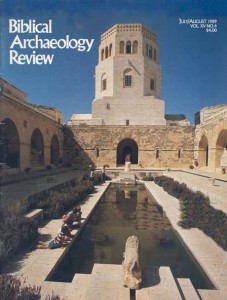 In the Bible we are twice told that Solomon, with the help of the Phoenician king Hiram, built a fleet of ships that sailed from Ezion-Geber (ETZ-yon GEH-ver)a near Eloth (Ay-LOHT) on the Red Sea.

We are now in a position, I believe, not only to understand the maritime background of this joint venture—the most celebrated naval enterprise in the Bible—but also to identify Ezion-Geber and Eloth.

The two Biblical passages—one in 1 Kings and the other in 2 Chronicles—are short enough to quote in full. The differences are minor: In 2 Chronicles, Hiram’s name is misspelled as Huram. In 1 Kings, Hiram makes 420 talents of gold available to Solomon; in 2 Chronicles, it is 450. But the basic story is the same.

“King Solomon built a fleet of ships at Ezion-Geber which is near Eloth, on the shore of the Red Sea, in the land of Edom. Hiram sent his servants with the fleet, mariners who had knowledge of the sea, to serve with Solomon’s men. They came to Ophir (O-FEER), where they obtained 420 talents of gold and brought it to King Solomon” (1 Kings 9:26–28).