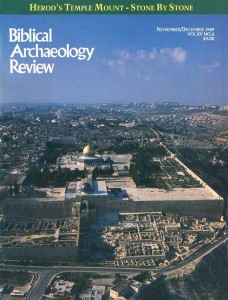 Herod’s construction in the Temple Mount area, like the construction of most of Jerusalem’s buildings, used local limestone.

The mountains around Jerusalem are composed of Turonian and Cenomanian limestone that has a characteristic horizontal layering. These horizontal layers vary between about 18 inches and 5 feet thick. In exceptional cases, the layers are even thicker.

To quarry this limestone the stonecutter first straightened the face of the stone. This consisted of chiseling the rock in such a way as to produce a flat vertical surface—the side of the incipient stone—and a flat surface on top. Next, with a pickax he dug narrow channels 4 to 6 inches wide on all sides except the bottom of the incipient stone. In two of these grooves, at right angles, the quarryman would insert dry wooden beams, hammer them tightly into place and pour water over them. This caused the wood to swell, and the consequent pressure caused the stone to separate from the lower rock layer.

The next stage required squaring-off the stones and preparing them for transportation. The smaller stones were simply placed on wagons, according to Josephus. Some of the corner stones in the Temple Mount, however, weighed 50 tons and sometimes more. Special techniques were developed to transport these stones on large wooden rollers. While shaping the stones, the masons left 12-inch-long projections on opposite sides of each stone. These 047projections were later removed. In the meantime, however, ropes were placed around these projections, and two short, but strong, cranes outfitted with winches lifted the stones on one side and lowered them onto rollers. Oxen could then pull the stones with ropes placed around the projections. According to Josephus, 1,000 oxen were used in this work.

The quarries were probably located near what we know today as the Russian Compound, in the heart of modern Jerusalem. There a 50-foot-long column, still attached to the bedrock, can be seen. In the process of quarrying the column, a natural fissure was observed in the rock, so the workmen simply stopped work and left the damaged column in place. The quarries in this area are 125 feet higher than the Temple Mount, so the journey of over a mile to the Temple Mount was downhill. Using the force of gravity obviously made transportation easier.

Once the stones arrived at the building site, they had to be put in place. At both the southwest and southeast corners of the Temple Mount, stones weighing over 80 tons are still in place at a height of at least 100 feet above the foundations. How did they get there? At our excavation site, some of the more pious local laborers who worked with these stones were so awed by their size that they attributed their placement to angels. It would have been impossible, they said, for mere man to lift them into place. In a sense, they were right; no man could have lifted these stones to such a height, notwithstanding all the sophisticated Roman engineering equipment available at the time.

In fact, the stones did not have to be lifted from below. They were actually lowered into place from above. The 16-foot-thick walls of the Temple Mount are basically retaining walls, built to retain the high pressure of the fill that was dumped between the previous platform and the new Temple Mount wall. This was Herod’s way of enlarging the previous platform to twice its original size. Herod’s engineers solved the construction problem by pouring the internal fill simultaneously with the construction of the walls. Thus, the first course of stones was laid in the valley surrounding the previous Temple Mount. Then the area between the new and old walls was filled up to the level of the top of this course. This created a new work-level on top of which, from the inside, a second course of stones could be laid. Again fill would be added on the inside, so that a third course of stones could be laid. And so on, course after course, until the whole of Herod’s extension was raised up to the level of the previous Temple platform.

The buildings on the Temple Mount were built of smaller stones. Stones from these structures were thrown down into the street below when the Romans destroyed Jerusalem in 70 A.D. Most of them were later scavenged for other construction. But a few were found in the excavations. These weighed between two and three tons. Stones of this size would have posed no problem for the skilled builders of Herod’s Temple Mount.

Leen Ritmeyer, an archaeological architect, has worked on Jerusalem’s major digs: the Temple Mount, the Jewish Quarter, the Citadel and the City of David. He directed the restoration of the Byzantine Cardo and the Herodian villas in the Jewish Quarter in the Old City of Jerusalem. Ritmeyer’s reconstruction drawings of numerous sites throughout Israel appear in many journals and books on Biblical archaeology.