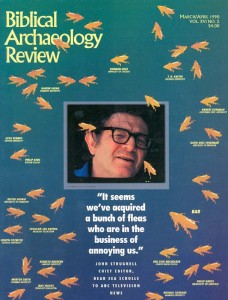 One of the world’s preeminent Dead Sea Scroll authorities, who at one time had full access to all the fragments, including those still unpublished, has roundly condemned the continuing delay in releasing the full texts.

“Since 1960 there has been no excuse for the lack of publication. Publication understandably takes time, but they [the texts] should have been appearing at regular intervals. Yet this has not been the case.”

According to Fitzmyer, the principal reason for the delay is that the scholar-editors entrusted with publication want to write extensive commentaries on the texts before publishing them, so that theirs will be the last word on these important texts. In explaining the delay, Fitzmyer said: