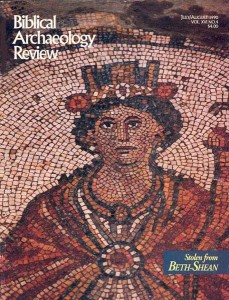 Archaeologically speaking, Beth-Shean refers to two major sites. The first is a tell, a magnificent mound rising from the plain: Biblical Beth-Shean on whose walls the Philistines displayed the mutilated bodies of King Saul and his sons, whom they had killed in battle at nearby Mt. Gilboa.

Beth-Shean has been inhabited almost continually for something like 6,000 years. Today it is home to 15,000 Israelis. Modern Beth-Shean, adjacent to the archaeological ruins, is a development town with one of the highest unemployment rates in the country. Nearby kibbutzim, about 20 miles south of the Sea of Galilee, till the fertile Jordan Valley.