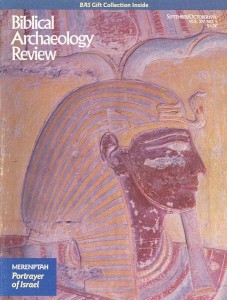 Lust Among the Ruins? Part II

I appreciate your response to Father Bruce C. Perron in the May/June issue (“Lust Among the Ruins?” Queries & Comments, BAR 16:03). I think Father Perron unjustly interpreted the photograph of me (“1990 Excavation Opportunities,” BAR 16:01) as embodying a theme of lust.

Most volunteers on digs wear shorts and T-shirts. Why should the photograph of me be considered lustful simply because I am in normal dig attire? I thought “good Christians” were taught not to judge others, lest they be judged. Furthermore, I think Fr. Perron’s interpretation of the image was a result of projecting his own thoughts onto the image. Frankly, I am ashamed of Fr. Perron. The object in the image to be focused on is not my body, but rather the hypocaust tiles, one of the most spectacular finds in my grid last season.

But if it is my attire, or the pose I assume in the photograph, that Fr. Perron objects to, why didn’t he complain about the picture in which a male student volunteer appears excavating an iron knife? This gentleman is assuming the exact same pose as I do in the picture of me—kneeling in the process of excavating. What about the picture in the same issue, in which a male archaeological draftsman sits without a shirt, wearing only shorts, towel and hat?