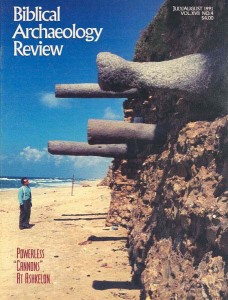 Hebrew University professor Nahman Avigad, the world’s leading authority on Hebrew seals, lamented that “among the hundreds of Hebrew seals and seal-impressions dating from biblical times known up to now, not one of their owners can be identified with absolute certainty with a person mentioned in the Bible.”1 That was in 1978.

Today, the situation is better than it was then. True, “absolute” certainty cannot yet be claimed. But “very near” certainty can. Five identifications have been made—four of them by Avigad, who summarized all five in a seminal article.2 The fifth was made by Yigal Shiloh, the excavator of the City of David, the oldest inhabited part of Jerusalem. Now, I can add a sixth.

In ancient times, seals were used to witness or sign documents. The seal was impressed on a lump of clay called a bulla (plural, bullae). Incised on the seal and impressed on the clay were usually the name of the seal’s owner, his father’s name (patronymic) and, occasionally, the title of the seal owner.