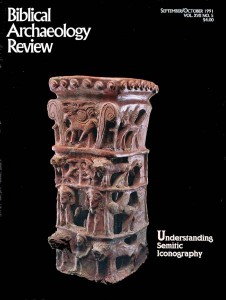 This year is the hundredth anniversary of the birth of William Foxwell Albright, this century’s greatest biblical archaeologist. To mark the occasion, a scholarly conference was held at the Johns Hopkins University, in Baltimore, where Albright taught.

The papers presented attempted to look forward, to chart the course of ancient Near Eastern studies in the next century. They were very scholarly, not to say esoteric. One has special relevance to BAR readers, however.

In the course of his remarks, the man who now holds the William F. Albright chair at Johns Hopkins, P. Kyle McCarter, talked about scholars as popularizers. Speaking to his fellow scholars, McCarter said:

“In the next century, we should be popularizers. We dare not leave it to Harold Bloom.a

“Now I know the point I’m making is controversial. Some of you think that when we popularize our field we cheapen it—or, at least, that we oversimplify it and discard or neglect its significance and, indeed, its very integrity.