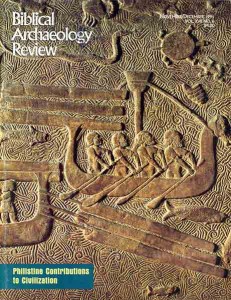 Carbon-14 (C-14) tests on samples of the Dead Sea Scrolls have substantially confirmed the previous date of the scrolls based on paleography (the shape of the letters), according to two recent reports.1

This general conclusion was announced in a press release some months ago, but when BAR asked Magen Broshi, curator of the Shrine of the Book in Jerusalem for a copy of the lab report, he refused to release it, stating, “Why should we give it to you when you taunt us?” Professor Israel Carmi of the Weizmann Institute of Science in Rehovot, Israel, promised to provide us with a copy, but later reported that he was instructed by his colleagues not to do so.

As one of the reports recognizes, the C14 tests were undertaken as a result of prodding by outside scholars, principally Robert H. Eisenman of California State University, Long Beach, who question the paleographic dating of the scrolls.

In 1951 C-14 tests were performed on the linen in which one of the scrolls had been wrapped, but no tests were done on the scrolls themselves. Since then, C-14 testing has become far more refined and only a minuscule amount of material is needed from a scroll or a fragment to perform the tests.

The recent tests on the scrolls were performed in Zurich by the Institut für Mittelenergiephysick, which was involved in the C-14 dating of the Shroud of Turin.