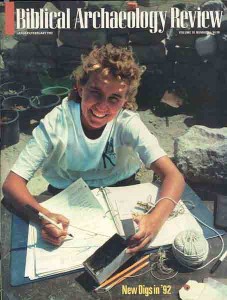 Gary “Termite” Lindstrom is a dig director’s dream. Lindstrom owns and operates a termite and pest control company in Oakland, California, and his profession requires him to inspect the dirt under buildings. But each June for the past 22 years, Gary has kissed his family goodbye and headed for Israel to dig in a different kind of dirt—historical dirt.

Since 1984 he has worked at the Sepphoris excavation, four miles outside of Nazareth, with Professor Jim Strange of the University of South Florida. In 1986, Gary became an area supervisor. Before that he worked several seasons at Khirbet Shema, two miles south of Moshav Meiron; at Caesarea Maritima, Herod’s magnificent Mediterranean sea port; at the village of Jish, or Gush Halav, as it is called in Hebrew; at Nabratein, which lies between Jish and Safad; at Meiron; and at Tel el-Hesi, about 20 miles south of Ashkelon.

What possesses a person to take valuable time away from family and career and to pay his own expenses year after year to dig in the dirt? For Lindstrom, it is a sense of identity and a love affair with history.

With a scruffy blond goatee and a fair complexion weathered by too many days in the sun. Lindstrom looks as though he would be more comfortable talking about the mechanics of an engine than discussing the dating of artifacts. But when he begins to speak philosophically, another Lindstrom comes out, and when he speaks about life, you can tell he’s a man who knows what he’s talking about.