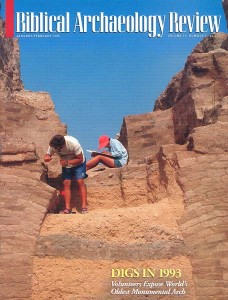 Enigmas, secrets—an aura of mystery still surrounds the Dead Sea Scrolls, as the titles of these videos attest. And the mere fact that videos are being produced for a mass-market on this once-obscure subject indicates that interest in the scrolls is as high now as when they were first discovered in the late 1940s and early 1950s near the site of Qumran, on the northwestern shore of the Dead Sea.
Join the BAS Library!