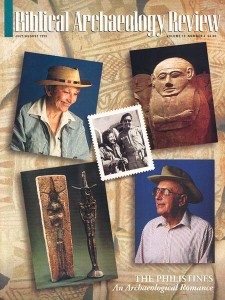 The City of Salt has been found. The late, much-lamented Pesach Bar-Adon identified it. Bar-Adon died in 1985 at the age of 77.

The City of Salt, I should say at the outset, has nothing to do with Lot’s wife, who was turned into a pillar of salt when, contrary to instructions, she looked back as the Lord rained fire and brimstone on Sodom and Gomorrah (Genesis 19:24–26). Nor do we propose to locate Sodom and Gomorrah.

The City of Salt that we are talking about is mentioned in a not-very-familiar passage in Joshua 15 that describes the territory allotted to the tribe of Judah and sets forth its boundaries. Modern scholars agree that this long list of cities and sites does not reflect conditions in Joshua’s time, say about 1200 B.C.E., but rather the situation about 500 years later (during the period archaeologists call Iron Age II), when the northern kingdom of Israel had already been conquered by the Assyrians and the southern kingdom of Judah was still flourishing.

The passage from Joshua comes at the very end of the list of places assigned to Judah:

“This is the inheritance of the tribe of the children of Judah. … In the wilderness: Beth Arabah, Middin, Secacah, Nibshan, the City of Salt, and Ein-Gedi; six cites with their villages” (Joshua 15:20, 61–62).