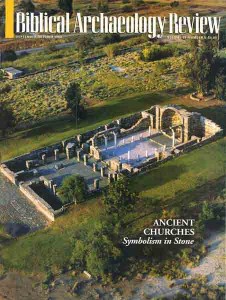 In some ways, you, who control access to the reconstructed text of MMT, are an odd couple—one an older, established scholar, the other a young, untenured teacher; one a professor of Christian origins from Harvard, the other a scholar of Hebrew linguistics from a university on the edge of the Negev desert; one fallen from the pinnacle of scholarly success, the other, no longer struggling in obscurity, now enjoys the perquisites of scholarly triumph.

The Dead Sea Scrolls have treated you very differently, although both of you are devoting your lives to these precious ancient texts. To one they have brought shame; to the other, honor. Professor Strugnell was forced to resign as chief editor of the official publication team when he called Professor Qimron’s Judaism a “horrible religion”; Professor Qimron now basks in the fame that his stunning legal victory over BAR has brought him.

Initially, the older man enlisted the younger as his assistant. According to the Jerusalem District Court, however, the senior scholar hit a wall he could not penetrate. The younger man solved the puzzle of MMT and restored the text. Almost inevitably, we recall that humiliating scene in Westminster Hall when Richard II gives his crown to Bolingbroke:

On this side my hand, and on that side shine.

Now is this golden crown like a deep well