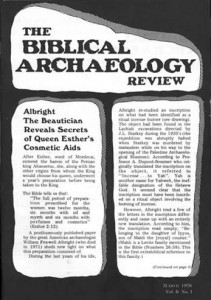 Trude Dothan arrived at the Gaza checkpoint precisely at eight in the morning. She had left her Jerusalem flat before dawn, had driven westward down the umber Judean hills toward the coast, then headed south toward Ashkelon—3,000 years ago, a powerful city-state within the Philistine pentapolis—now, a thriving Israeli city. South of Ashkelon, there were fewer Israeli settlements to be seen, then none at all. Prof. Dothan approached the Gaza Strip with a mixture of trepidation and anticipation.

This was one appointment for which she did not want to be late. The military commander had said eight, and she was there on the dot. A convoy was awaiting her.

It was hardly a time to be wandering around the Gaza Strip looking for antiquities. In early 1968, less than a year after the Six Day War, Gaza was a hotbed of terrorism. Hand grenades were being lobbed through open car windows with disturbing regularity. No one was certain that all the Egyptian mine fields had been cleared. Non-resident Israeli civilians were barred from the Strip altogether.

An expert in ancient anthropoid coffins, Trude Dothan had studied them in the detached manner of a scholar. Now, as she passed through the Gaza checkpoint, she wondered to herself whether she might not end up buried in one prematurely.