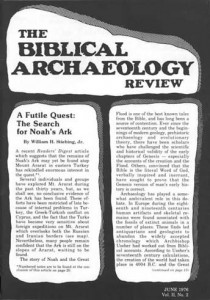 A recent Readers’ Digest article which suggests that the remains of Noah’s Ark may yet be found atop Mount Ararat in eastern Turkey has rekindled enormous interest in the quest.1

Several individuals and groups have explored Mt. Ararat during the past thirty years, but, as we shall see, no conclusive evidence of the Ark has been found. These efforts have been restricted of late because of internal problems in Turkey, the Greek-Turkish conflict on Cyprus, and the fact that the Turks have become very sensitive about foreign expeditions on Mt. Ararat which overlooks both the Russian and Iranian borders (see map). Nevertheless, many people remain confident that the Ark is still on the slopes of Ararat, waiting to be found.

The story of Noah and the Great Flood is one of the best known tales from the Bible, and has long been a source of contention. Ever since the seventeenth century and the beginnings of modern geology, prehistoric archaeology and evolutionary theory, there have been scholars who have challenged the scientific and historical validity of the early chapters of Genesis—especially the accounts of the creation and the Flood. Others, convinced that the Bible is the literal Word of God, verbally inspired and inerrant, have sought to prove that the Genesis version of man’s early history is correct.