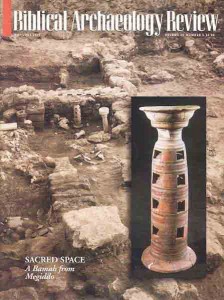 Goddess, priestess, queen or worshiper? No one knows the identity of this compelling woman from ancient Mari, whose wide, almond-shaped eyes have stared out from under her tall headdress for more than 4,300 years. Lines of bitumen still accentuate her arresting eyes, made of shell and originally inlaid with lapis lazuli pupils. Erosion has damaged the woman’s nose and chin, and only the remains of one earring project from the braided hair that encircles her face. A dovetail hole in the base of the neck suggests that the head was once attached to a body.

Measuring about 6 inches high, the gypsum sculpture is the largest of several female heads, all with characteristic cylindrical headgear, or polos, discovered at Mari (Tell Hariri in modern Syria), on the southwestern bank of the Euphrates. A team of French archaeologists found the head, dating to the 24th century B.C., near the entrance to the ancient city’s Temple of Ishtar. Scholars at first thought she might represent this divinity, the principal goddess of ancient Mesopotamia, who has been identified with the “Queen of Heaven” mentioned in Jeremiah 7:18. But after the discovery of similar heads in nearby temples dedicated to other goddesses, the identification was abandoned. The head has since been variously identified as a queen with elaborate royal headgear, as a priestess and as a faithful follower of Ishtar.