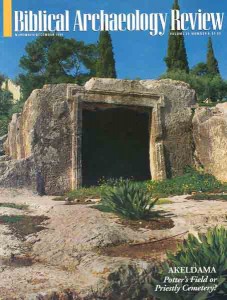 About a half mile south of the Old City of Jerusalem—at the southeast end of the Hinnom Valley, near where it joins the Kidron Valley east of the city—is one of the most impressive, important, yet largely unknown archaeological sites in the Holy Land.

Oddly, the site is not even listed in the recently published, authoritative, four-volume New Encyclopedia of Archaeological Excavations in the Holy Land.a Nor, so far as we can tell, is it mentioned in the 106-page encyclopedia entry on Jerusalem. Yet the area contains about 80 burial caves, most of which date to the time of Jesus, what archaeologists and other scholars refer to as the Herodian period (37 B.C.–70 A.D.). Some of these tombs are in magnificent condition, still standing to their full height.

To those who are aware of it, it is known as Akeldama, the Field of Blood, referred to both in the Gospel of Matthew and in the Acts of the Apostles.