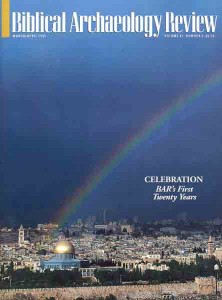 Talk about vision. I certainly had none when I started BAR. It began almost by accident, as an avocation. If I had any fixed notion, it was that it would be a magazine of ideas, not pictures. Excavations in Israel were full of stones, not gold. That’s why the first issue of BAR () has only one picture, an altar of stones. I was hardly suited to the task I was about to undertake. I had never taken a course in Bible or archaeology, and I knew nothing about publishing.

I was a lawyer. Over lunch one day in 1972, some lawyer friends and I were talking about a colleague with a successful divorce practice who had taken off with his family for the south of France to write a novel. “I could never do that,” I remarked. “Why not?” my friends asked. “Because my wife has become accustomed to the comfortable life I’ve provided for her,” I jokingly replied. My wife would now regard that remark as a form of atavistic male bonding. In the interest of domestic tranquillity, I must add that Judith has always worked and contributed to our income; she is an administrative editor at Time-Life Books.

That night at dinner, I reported the lunch conversation to Judith. “Try me,” she responded.

I had always wanted to live abroad—in college I dreamed of living on the Left Bank in Paris—but the time or the money was never right.