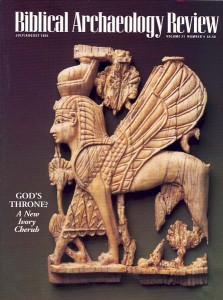 Both Elie Borowski and Israel Museum curator Tallay Ornan think the beautiful cherub that graces our cover came from Arslan Tash, about 20 miles east of the upper Euphrates River in present-day Syria. In 1928, a French expedition discovered an ivory hoard at the site of an eighth-century B.C.E. palace that once belonged to the Assyrian governor.

We naturally wondered how Borowski and Ornan made the connection. Ornan relied on similarities in style to known pieces from Arslan Tash. So did Borowski, but Borowski knows more. Since World War II, Borowski has been one of the most renowned dealers in Near Eastern antiquities, first in Switzerland, then in Toronto, and now in Jerusalem.a He was on the scene after the war when newly poor European aristocrats took their collections from bank vaults where they had been stored. He has been all over the Middle East, too, where peasants sold his name and whereabouts to their fellows who had discovered antiquities. The following is what Borowski told us about his experience of the Arslan Tash ivories: