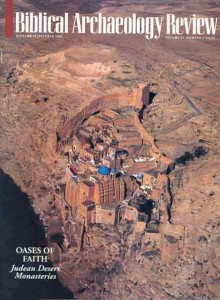 Between 1968 and 1982 and from 1985 to the present, Israel’s Ministry of Religious Affairs has exposed over 900 feet of the western wall of the Temple Mount in Jerusalem by digging a tunnel underneath the structures above. During much of that time I was the Israel Antiquities Authority’s District Archaeologist for Jerusalem. That is how, after resigning from the IAA, I became the archaeologist of the site.

It was not your usual excavation, to say the least. But the results have been highly enlightening.

We can now locate the Hasmonean fortress known as the Baris (or Birah) described in our ancient sources.

We have found pillars that still stand on the street abutting the wall of Herod’s Temple Mount, giving us some idea of how the Temple Mount and its environs looked when pillars like these stood in a long row in front of the western wall.

And we have even uncovered some evidence to locate the limit of the earlier Temple Mount before Herod enlarged it to nearly twice its previous size.